People in Kuwait have no incentive to reduce their energy consumption. I personally don’t really care about the Earth enough to let that influence the way I make my decisions, and i’d be lying if I said I was. The planet was here millions of years before we came to be and it will be here millions more after we pass. What I do care about is the inevitable transition that Kuwaitis have to suffer through as our oil begins to run out and become useless.
It is myopic and childish to simply ignore the fact that our country is almost entirely dependent on a finite resource. Oil will run out eventually and sooner than most people think. How will this transition happen? What are we doing to make sure that it is as painless and seamless as possible? Over 90% of our labor force works for the government. Their wages come from oil revenues. We cannot sustain this incredible level of dependency on one single, finite resource. Seeing as how this is such a valuable commodity, and how dependent we are on it, shouldn’t we be trying to make sure that it lasts as long as it can? 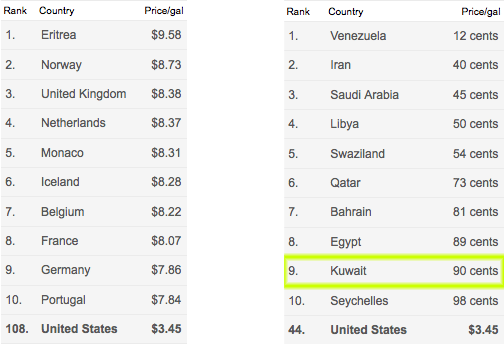 (The data is a bit out of date, but the general idea remains)

I propose that we incrementally raise the price of gasoline over the next 4 years, raising it so that by the end it will have become 4 times the price it is today. This will be done without sacrificing quality of life or having it become a burden on people. The way to do this is by having an energy rebate. This was mentioned before in greater detail here and here. The government will have made 4 times as much money selling domestic petrol than it would have. This money will go straight back to Kuwaiti citizens in the form of a rebate check, or an added bonus onto their paychecks. The amount will be the average amount that every Kuwaiti has spent on energy that month. This means that if you consumed an average amount of fuel, the check will mean you broke even. If you consumed more than the average amount you will have spent more on gasoline overall that month, since the check is less than what you spent on gasoline. If you consumed less than the average you will have made a profit just by being efficient and not wasting petrol.

The point of this initiative is that it alters behavior towards efficiency. The increase in cost has to be made public through a massive public awareness scheme so that people know for sure that in a few years time gas will be very expensive. This will make them think twice when buying gas-guzzlers and maybe think about buying a hybrid. The quality of life is arguably the same between the two, yet one is far more efficient than the other. The problem today is that people just don’t have the incentive to make that decision, and I don’t blame them.
Of course, the revenues from this program will be much more than the rebate checks that get sent out, since the government will still be collecting from industrial, commercial and non-Kuwaiti residents. This extra cash must go into improvements in pedestrian infrastructure, bus subsidies and many more and better buses, and of course into building the Kuwait Metro.
The point of this is to ease the transition into our inevitable, oil-less future. Will we enter that new age as spoiled brats that can’t do anything for ourselves, or as independent, reasonable and rational adults? The word ‘sustainability’ has become dreadfully overused, but our way of life just isn’t sustainable. We don’t have to sacrifice the quality of our life to be sustainable, we just have to live differently. Who knows, maybe it will turn out even better?